Facebook and Fair Housing: What Agents Need to Know

For the past year, Facebook has been dealing with a housing fire. The government has accused the tech giant of helping advertisers violate the Fair Housing Act, and the fallout has had a huge impact on how real estate agents use Facebook to sell houses. Today, we’ll look at what real estate agents should know about Facebook’s fair housing crisis, so you can be prepared.

Jump to a Section

In August 2018, the U.S. Department of Housing and Urban Development (HUD) filed a formal complaint against Facebook for allowing home sellers to violate the Fair Housing Act. The controversy centered around how Facebook allows advertisers to discriminate by showing or hiding housing ads from certain groups.

What Does the Fair Housing Act Say?

Generally speaking, the Fair Housing Act prohibits discrimination when engaging in housing-related activities based on:

As you’re probably aware, this impacts most aspects of real estate agents’ jobs including who they represent, how they price homes, and how they market homes for sale. Specifically, advertisements cannot suggest any kind of limitation or preference based on protected traits. For instance, advertisements cannot discourage families with children from viewing a home because that would be discrimination against family status. 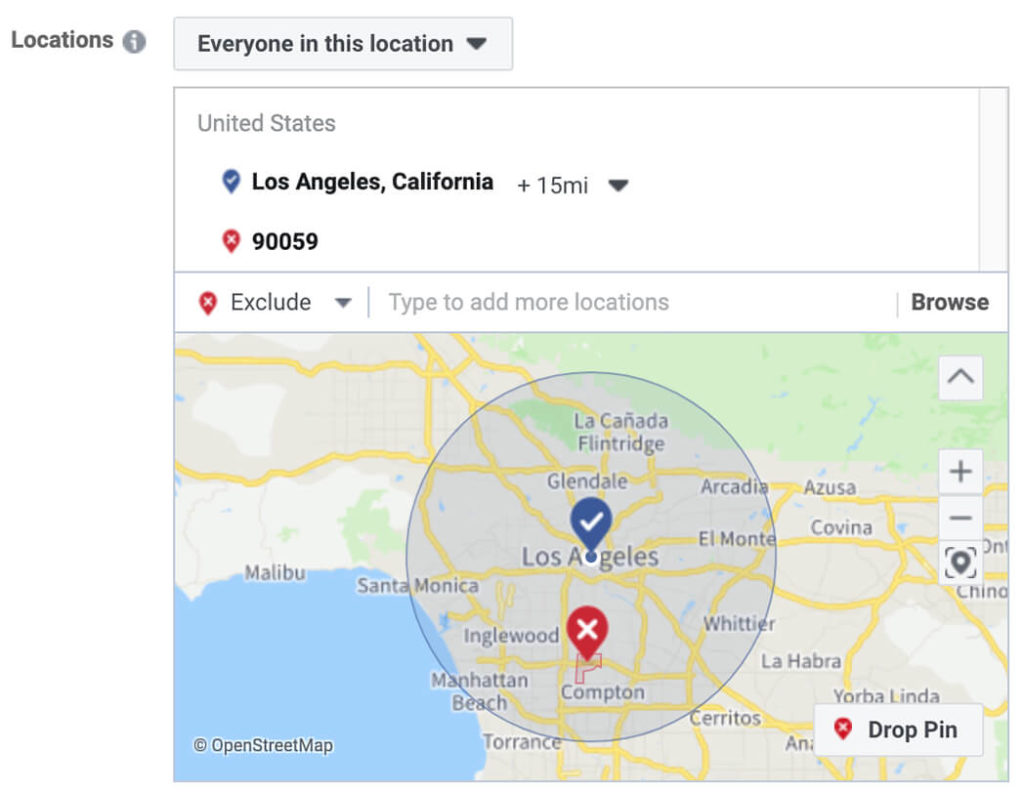 ZIP codes can no longer be excluded from Facebook real estate ads.

As an ad publisher, Facebook has a responsibility under the law to prevent discrimination in the ads on its platform. HUD has argued that Facebook encouraged discrimination by allowing advertisers to exclude people from seeing ads based on interests tied to religion, race, disability, parenting, and nationality. Facebook previously allowed advertisers to exclude zip codes with high populations of protected minorities from seeing ads, too.

Facebook may have also violated the Fair Housing Act in how it promoted its advertising platform as a useful tool for home services. Wording like “the perfect homeowners” and “personalizing property ads” are cited in HUD’s complaint against Facebook.

What Was Facebook’s Response?

In March 2019, Facebook COO, Sheryl Sandberg, announced changes to its options for advertisers in response to the allegations of discrimination. Ads related to housing, employment, and credit can no longer be targeted based on age, gender, or zip code. Several options for targeting people’s interests were removed as well.

She also announced that Facebook would build a tool to allow users to search for all the current housing ads being shown across the U.S. This tool would ensure they could access housing ads regardless of whether they were specified as an audience by the advertiser. 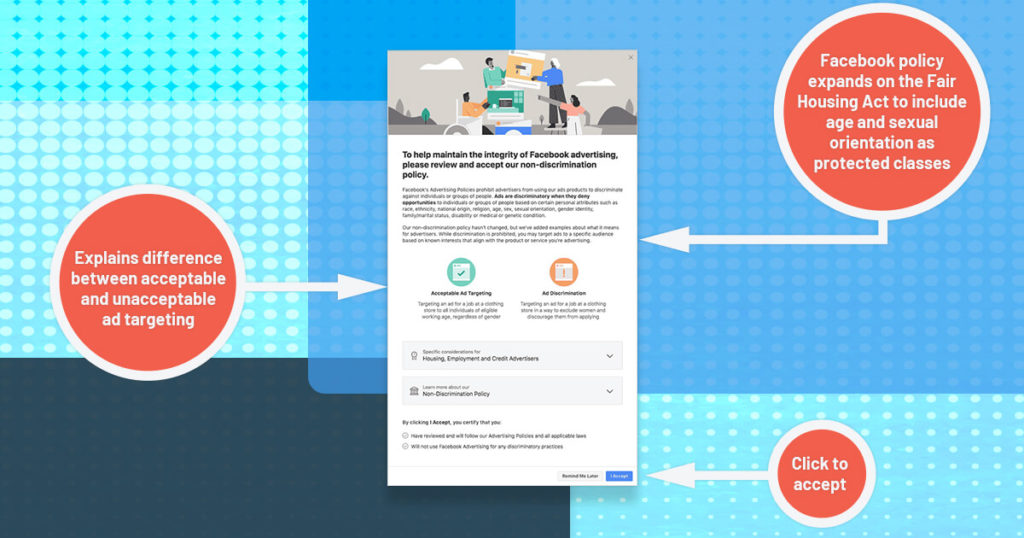 Facebook’s policies have always prohibited discrimination in advertisements, but recent changes make it easier to follow that policy. For instance, you may notice that you have fewer options for excluding people when selecting the audience for an ad. In fact, Facebook has removed over 5,000 audience targeting options.

This change means you have to put the focus on interests that should be included in your target audience. For more on choosing an audience for ads, see our guide to targeting the right audience with your Facebook ads.

Facebook has not yet rolled out its housing ads search tool, but based on what we know it has the potential to expand your reach significantly. This tool will allow users nationwide to have access to your ads. That means a well-crafted advertisement has the chance to get the attention of users who are likely to be in the market.

On the other hand, this tool will also make it easier for users to police any ads you launch. So as you craft your message you should consider that your intended audience may not be the only people seeing your ads. Failure to follow Facebook’s non-discrimination policy can lead to your ads being removed, and it leaves you open to Fair Housing complaints from HUD.

Where’s the Line Between Fair Ad Targeting and Discrimination?

Effective advertising hinges on getting the right message in front of the right people, so it can be hard to tell when targeting crosses into discrimination. Many discriminatory practices outlined by HUD share these common patterns:

Ad targeting should not be used to prevent a particular group from receiving information about a home. Instead, you should think of targeting as a way to give people the information that will likely matter most to them. This lets you generate the most interest possible, and people can decide for themselves what’s right for them. 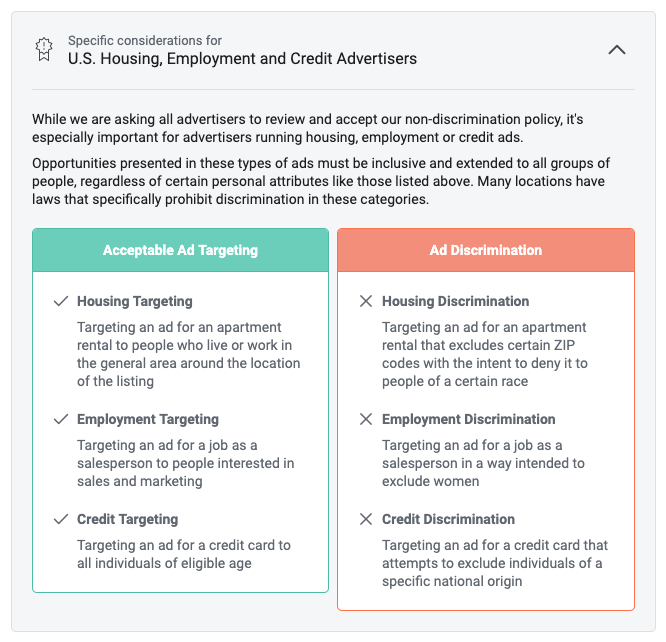 Let’s use an example to show the difference between fair targeting and discrimination. Suppose you had a listing for a 2 bedroom townhouse in a suburban area. You might provide two different ads that speak to different demographics. For instance, for families with children, you could highlight the nearby schools, and for single professionals, you could tell about the convenient access to entertainment. This would be acceptable.

On the other hand, let’s suppose that an agent wanted to target young professionals because they could afford a higher mortgage without children to care for. This agent might exclude people who have shown interest in topics related to children like childcare or parenting blogs. This would be discrimination because you are limiting access to information based on family status to favor one group over another.

Sometimes discrimination can be much more subtle and even unintentional. For example, simply mentioning that this same townhouse is located near Bethel Baptist Church could be considered discriminatory. HUD considers this statement an implicit preference for a particular religion and recommends that any religious references come with an equal opportunity disclaimer.

Absolutely. The fact that Facebook has received so much attention for its advertising practices just shows how many people are using Facebook to sell houses! Despite the recent changes, no other advertising platform can match Facebook’s combination of wide reach, user insight, and cost-effectiveness. Ignoring such a huge audience would be a mistake for any serious real estate agent.

If you’re concerned about your advertisements meeting Facebook’s new policies, you could always hire a professional to run your ads for you. For example, our TurnKey Suite Account Managers specialize in real estate advertisements and know the ins and outs of proper targeting. Having someone create and manage your Facebook ads is a cost-effective option that saves you the time of having to master it on your own!

Update (7/14/2020): In June 2020, Google also announced that it would be making similar changes to its platform to limit housing discrimination. Advertisers will no longer be able to target by ZIP code or demographics when running housing ads. Click here to read their official announcement.

Do you want to get started in Facebook marketing, but don’t have the time? Try TurnKey Suite by Home ASAP. You get built-in Facebook ad spend, a ton of tools, and an account manager to help you get the most out of it all, so you can focus on closing deals.

Check Your Ads For Compliance 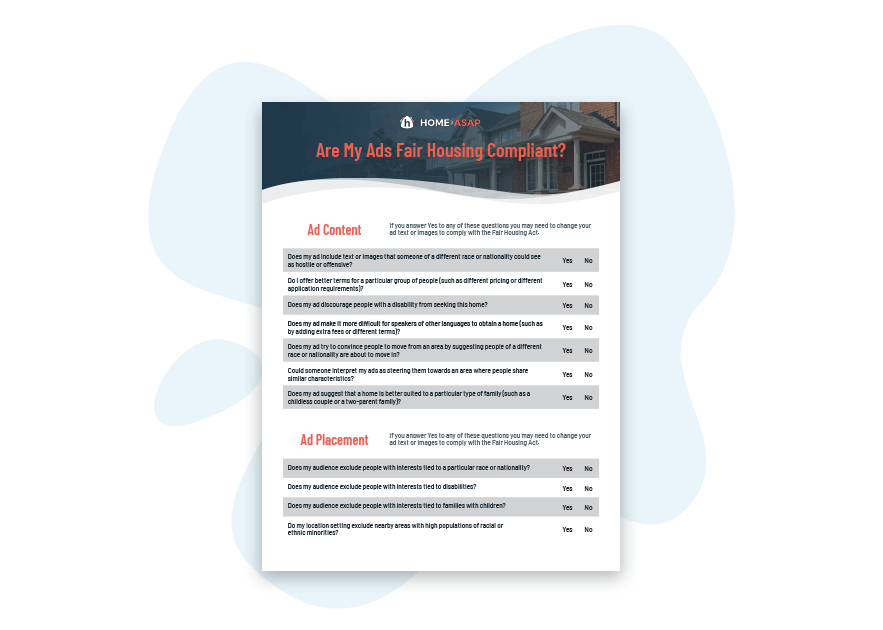 Picture this. You've finally got homebuyers' attention with an amazing Facebook post. They click the link to your Facebook business page. They're instantly impressed with the beautiful cover image and your professionalism, and yet nothing else happens. Your potential... Not so long ago, the bulk of decisions made within the real estate industry relied heavily on anecdotal information and gut feeling. Not surprisingly, some of these decisions didn't hit the mark and proved costly. These days, thanks to big data and advanced data... Seller leads are at the top of every agent's mind nowadays. Here are the top strategies we are seeing for getting new listings in today's market. 1. Home Value Requests Zillow became a household name because homeowners love seeing the estimated value of their home.... Helping a client sell their home and worried about getting its value? If you want to maximize the value of their home, there's a little more to it than simply putting the house on the market and hoping for the highest price. Whether you're selling or looking to prep... 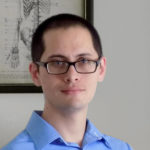 Jonathan earned his Masters in Mass Communications from the University of Florida. He specializes in online communications and web design. When he’s not developing marketing strategies, he enjoys hiking and playing the guitar.

Not so long ago, the bulk of decisions made within the real estate industry relied heavily on anecdotal information...

Seller leads are at the top of every agent's mind nowadays. Here are the top strategies we are seeing for getting new...

Helping a client sell their home and worried about getting its value? If you want to maximize the value of their home,... Real estate agents can find it challenging to keep pace with online marketing in an ever-changing market. Social media... The prospective purchaser of your home will usually order a thorough inspection by a professional inspection company....